On Sept. 10, communities across Long Island gathered at Massapequa’s Marjorie Post Park to participate in the 14th annual Walk to End Alzheimer’s dise 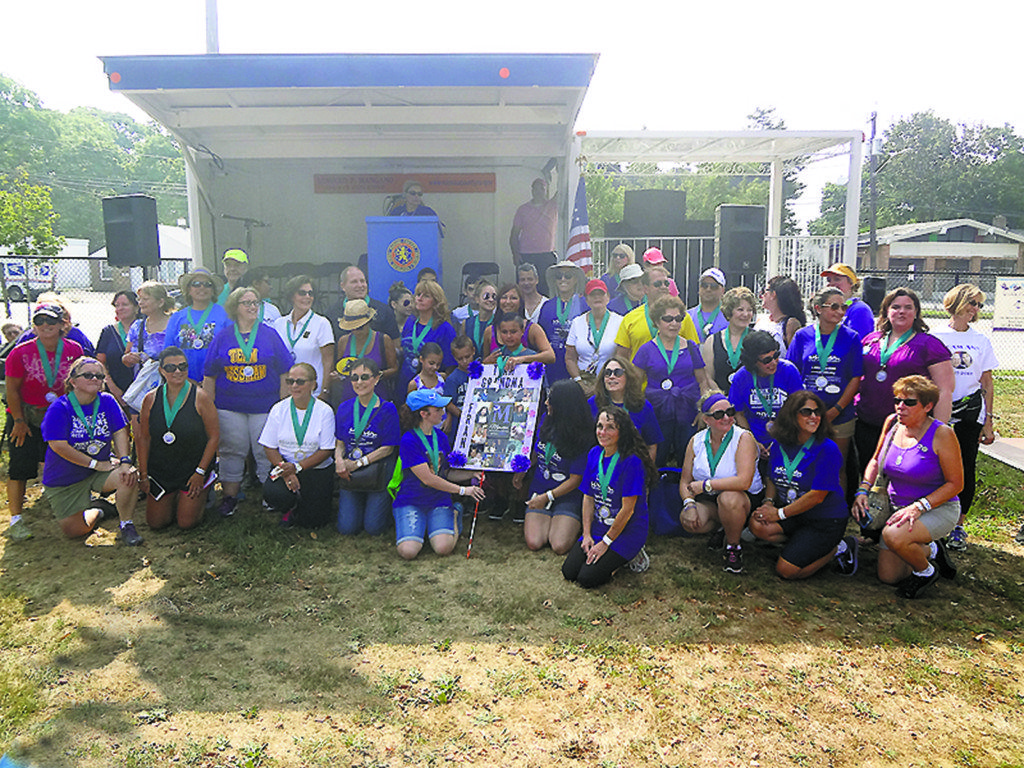 Mary Ann Malack-Ragona is the executive director/CEO of the Alzheimer’s Disease Resource Center (ADRC), the organizer of the 14th annual West End Walk For Alzheimer’s & Fall Festival. The 5K walk consisting of two laps around the interior perimeter of Marjorie Post Park—the first time the event was held at this venue—raised money to help combat Alzheimer’s.

“We’ve been doing this walk since 2003…in previous years we did it in Old Bethpage Village Restoration. The first weekend after Labor Day has always been the date we held our walk, but this year the Restoration couldn’t give us that date. They wanted us to move the walk to August, but it would have been too hot then,” said Malack-Ragona. “So we contacted the Town of Oyster Bay, and they were more than happy to allow us to hold the park walk here. Their team is extraordinary, and they have helped so much and made this such a pleasure to do. We will absolutely be holding the walk at Marjorie Post again next year.”

The ADRC was originally founded in 1983, as the Long Island chapter of the Alzheimer’s Association, but has existed under its current moniker since 2012, after splitting from them over what Malack-Ragona cited as limitations on how much her chapter was allowed to help people and fund research.

“Our mission is to care for local families, and we’re actually part of some local projects that we’re funding in hopes of finding a cure for Alzheimer’s disease,” she said. “We provide care and consultation, information and referrals, education and training, and we have caregiver support groups. We meet with families and determine if they have an accurate diagnosis. If they don’t, we get them to someone who can tell us one way or the other what we’re looking at. Once we know, we begin to develop a long-term care plan and we will stay with the family throughout the entire process.”

At Marjorie Post, there were also a series of events set around the walk, including a number of vendors representing the multitude of services that ADRC offers, as well as fun activities such as performances by local dance schools, a magician, a petting zoo complete with pony rides as well as breakfast and lunch.

Dana Capizzi of Massapequa was one of the many people walking the 5K that day in support of a loved one.

“My mother was diagnosed with early-onset Alzheimer’s disease at the young age of 65,” she said. “As you know, there’s a lot of pain and suffering that this disease causes, and today’s walk strengthens our ambition and belief that there may be a cure someday for Alzheimer’s disease. My mother has influenced me in such positive ways that I do believe, and will continue to have faith.”

Carrie Breen of Levittown was participating in the walk with her two children and while she thankfully knows no one with Alzheimer’s herself, she said that she always likes to get involved with worthy charities such as ADRC.

“I figure, why wait until the worst happens before getting involved? I like to seek out good causes to support, and this is certainly one of them,” she said. “Besides, it’s a lovely day and it’s a great way to teach my children important lessons about helping others as well.”
Dan Taylor and his family drove in from Oyster Bay to get involved. Having lost his father to Alzheimer’s several years ago, he noted that he supports anything and everything involved in combating the affliction.

“Watching my father slowly deteriorate from Alzheimer’s was rough…I wouldn’t wish that on anybody,” he said. “I’m just pleased and honored that my wife and kids came here today to walk with me. ADRC is a great organization, and there’s a great turnout here for the walk today. I hope all of our effort can help make a difference.”

The 5K walk is one of several fundraisers that ADRC holds annually, Malack-Ragona said, and due to the overwhelmingly positive response from the community, she said that the event will become a staple at Marjorie Post Park for the foreseeable future.

“We hold seven or eight fundraisers a year, plus there are approximately 20 or 30 third-party events as well. At least 75 percent of our budget comes from fundraising,” she said. “Coming into today’s event, we’ve raised $150,000 with over 500 participants. Everyone is already telling me this is the best walk we’ve ever done, and we really appreciate the community coming out and helping us like this.”

To find out more, visit www.adrcinc.org.