The MacArthur girls soccer team doesn’t rebuild, it just reloads.
The Lady Generals are off to an incredible start to the 2022 season. Thus far they are 6-0-1 and have yet to allow a goal this season. That’s given first-year coach Steve Costello plenty to be happy about.
“Defense has been our hallmark,” Costello said. “We start our offense from the back line as well. We have played tough, gritty soccer and taken advantage of opportunities when they come our way.” 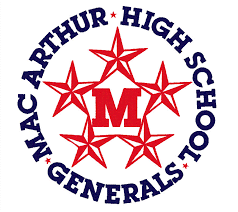 The goalkeeper for the Lady Generals is senior Lexie Thompson and the defenders on the back line are Ava Angiuli, Caitlyn Barry, Meghan Wetzel, Hallie Bray and Ani Angelakis. The defensive midfielder is Julia Marrazzo.
“As a group they have played great defense,” Costello said.
On the offensive side of the pitch, Kaitlyn Tung is MacArthur’s leading scorer, with game-winning goals against both Garden City and South Side. Carly Koprowski and Sara Kealey have also scored big goals for the Lady Generals.
“Kaitlyn is tough and talented,” Costello said. “Midfielders Bella Calabro and Hailey Metzger are outstanding two-way players, going box-to-box on offense and defense.”

The team’s mindset, is to put in the work and try to improve each time out.
“We all want to be better and have developed a mindset that we will do whatever it takes to get better on the field and work hard at all times,” Tung said. “Not only the players, but the coaches providing drills with specific targets to help the team in areas we aren’t as successful in. It takes everyone’s commitment to be successful and within the program everyone has given their all.”

Added Thompson: “I think that our team has been so successful this season because we are all so determined to win, and we know that in order to do that we have to put in the work at practice and be connected as a team.”
The Lady Generals won the Nassau County championship in 2019. They lost in overtime in the county finals in the spring 2021 season. They graduated a host of seniors last season—including three Division 1 players. But MacArthur does not miss a beat.
“After losing not only our leading goal scorer but also an asset in the middle of the field, the team knew we would all have to step up to make up for these players,” Tung said. “Our success has been drawn from our hard work and team bonding.”

Many players on the MacArthur varsity team have played club and travel soccer together for years. Tung, Thompson and Hallie Bray started together with the Levittown Soccer Club at nine years old. Those bonds help contribute to the team’s success.
“I think all of us were unsure of how this season was going to look for us,” Thompson said. “Since we got on the field and started practicing, there have been a lot of people stepping up and filling big shoes of past seniors, and they have been doing a great job.”
Costello has built the MacArthur baseball team into one of the premier programs on Long Island. So far, the transition to soccer has gone smoothly.

“Coach Costello is such a great coach,” Thompson said. “We had know idea how the transition to soccer would be for him, but he has so much experience coaching that he definitely knows what he’s doing and I couldn’t ask for anything more.”
Added Tung: “At first when the team was told there would be a change in the coaching staff, we were all a little nervous because we didn’t know who it would be. Coach Costello came in knowing how successful we were last year and ready to give everything he has so that we would be even more successful this year. He has done such a great job bringing the team together and providing intense practices to make us better individually and as a team.”

Costello can find similarities between the diamond and the pitch.
“Like baseball, soccer is a game where luck plays a huge part—a line drive can be hit right at some one, and a great shot can hit the frame,” Costello said. “As in baseball, you can’t focus on the result as much as on the process. You want to put your players in a position where they can play well without any outside distractions and increase your chances of getting a good outcome.”
A good outcome is something these players are quite used to.