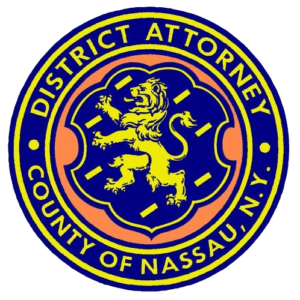 Nassau County District Attorney Anne T. Donnelly announced a Massapequa man was sentenced to up to 15 years in prison for a fatal drunk driving collision on Stewart Avenue in September 2020.
Thirty-one-year-old John Cappello pleaded guilty on April 27, before Judge Robert Schwartz to aggravated vehicular homicide (a B felony); second-degree manslaughter (a C felony); and second-degree assault (a D felony). Cappello was sentenced to seven to 15 years in prison.
“John Cappello made a selfish choice to get behind the wheel at nearly three times the legal limit for alcohol,” Donnelly said. “It was a choice that cost an innocent Manuela Brugueras her life. Cappello careened into oncoming traffic and struck Brugueras’ vehicle head-on, destroying both of their vehicles. We hope that today’s prison sentence gives some closure to Manuela’s family. Our thoughts remain with them.”

Donnelly said, according to the investigation, on Sept. 22, 2020, at approximately 10:39 a.m. near the intersection of Stewart Avenue and Linden Avenue in Bethpage, the defendant, driving a Mitsubishi SUV while highly intoxicated, crossed the double yellow lines on Stewart Avenue and entered northbound oncoming traffic, crashing head-on into 74-year-old Manuela Brugueras’ Nissan SUV.
The defendant was extricated from the vehicle because of the severity of damage to his car.
Responding police discovered hypodermic needles and an open pint-sized bottle of blue Pinnacle vodka in the defendant’s vehicle.

Cappello was arrested at the scene of the crash by detectives of the Nassau County Police Department and was taken to Nassau University Medical Center for treatment of his injuries.
Brugueras was transported to Saint Joseph’s Hospital in Bethpage, where she was pronounced deceased.
The case was prosecuted by Senior Assistant District Attorney Alexander DePalo and Senior Assistant District Attorney Brooke Salvatore of the Vehicular Crimes Bureau. The defendant is represented by Marc Gann, Esq.

—Submitted by the office of the Nassau County District Attorney