Five years ago, this column wondered what happened to Black Friday.
I lamented the end of the one-day bargains that had people lining up for hours in the dead of night to secure that three-dollar foot massager at the crack of dawn. Intelligent shoppers would plan their assault on retail locations using military-like precision. It wasn’t enough to know what sales you would be taking advantage of; you needed to know where to go first. 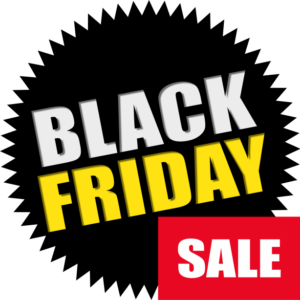 Stores advertising limited quantities of your must-have gifts needed to be hit early in the day, or you would be shut out. You could always circle back for something else later in the day. My brother and Sister-in-Law were the King and Queen of Black Friday shopping. Taking advantage of the hundreds of printed circulars they received in the week leading up to Black Friday, they would plot out a course of attack that was second to none.
All that ended thanks to the violence several idiots would perpetrate because they acted like animals when the store doors were finally opened. No retail giant wanted to be associated with violence, so they began offering Black Friday deals all weekend. Some even guaranteed quantities, so it didn’t matter if you showed up on Sunday afternoon. You were getting that big-screen TV for $199.

Many also offered the same Black Friday deals online, so you didn’t have to get out of bed. Just place your order while wearing your pajamas and they will deliver it for free in a few days. Before they took over the world, Amazon touted a “Cyber Monday” after Thanksgiving for all their sales.
But his year, retailers have effectively killed Black Friday, rendering it useless.
Target, Kohl’s, Walmart, Amazon, and Best Buy are all advertising Black Friday savings for the entire month of November. What’s left for Black Friday?
It’s not like they are “teasing” us with certain items on sale now and holding back their best deals for Black Friday. Retailers are inviting us to shop early and not wait until Black Friday.
The best result of this new “Black November” is that these retail giants will now be closed on Thanksgiving Day, allowing their employees to celebrate with their families. There were quite a few years that Walmart, Target and others would open sometime after dinner on Thanksgiving to avoid the insanity of the projected Black Friday carnage.
So, what do former Black Friday-a-holics do with their free time now?

Unfortunately, I’m not quite ready to do my Christmas shopping in November. Not that I was ever the type of Christmas shopper to be done early and sit back drinking eggnog. I usually did most of my Christmas shopping in the middle of December after I had a better idea of what I wanted to get for gifts.
When the kids were tiny, we would wait for the Sears Christmas catalog to come out and make a wish list as we perused the glossy pages. When they got older, I would take them to Toys-R-Us and walk around the store oohing and aahing while I took copious notes. Then my wife and I would wait until the week before Christmas when there were “extended” store hours and go get everything in one fell swoop.

Sometimes I feel like the old man yelling at the clouds about how much better it was in “my” time. I never did all my holiday shopping on Black Friday, but I certainly took advantage of the great sales now and then. When the pandemic hit in 2020, I found that shopping for presents could be done entirely online. We followed that tradition again in 2021 and never stepped foot inside a retail store.
But once again, corporate greed has taken away the little joy we once had, causing the extinction of Black Friday.