Five teams from the Massapequa School District competed in the New York State Odyssey of the Mind contest at Binghamton University April 12 after dominating the regional tournament last month. While no trophies were brought home, students called the opportunity “a once-in-a-lifetime experience” that gave them a great sense of accomplishment.

Odyssey of the Mind is an international educational program based on creative problem-solving. Students select from a variety of problems that range from building mechanical devices to interpreting literary classics and compete at the local, state and world levels.

A team from Massapequa High School competed on the Division III level for grades 9-12. Team members were Amanda Gordonson, Joe Mottola, Mackenzie Conkling, and Courtney Conkling. The team was coached by Matthew Swanson.

“We are very proud of our students for attaining this opportunity to compete at the state level and for displaying exemplary levels of levels creativity, collaboration and problem-solving throughout this year’s competitions,” said Superintendent Lucille Iconis, who attended the state tournament. 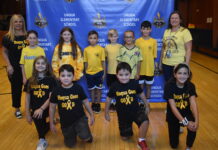 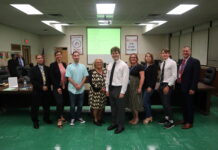