Second Amendment supporters agree that New York State has one of the strictest regimes in the nation when it comes to gun ownership and licensing.
Thus any laws regarding guns introduced by the state will become a target for those believing that there undue restrictions on constitutional rights.
These issues will be decided in the courts, which thanks to many years of Republican success of placing conservatives on the judiciary, will see friends of the Second Amendment in high places.

On Nov. 3, the Supreme Court strongly signaled that it might strike down the state’s strict conceal carry laws.
In Westbury on Oct. 28, at the “Yes We Can” Community Center in the New Cassel section, Governor Kathy Hochul signed a series of bills that will ban “ghost guns,” untraceable firearms critics charge are used by criminals to evade background checks.

The governor made note of the case before the Supremes, titled New York State Pistol and Rifle Association (NYSPRA) vs. New York State Police. The state has a high standard for issuing conceal carry permits, and the questions by the court conservatives, a 6-3 majority, seemed to hint at a ruling that the constitutional right to keep and bear arms “precludes states from insisting that individuals show ‘proper cause’ before being licensed to carry a firearm for self-defense,” according to Politico.

Anton Media Group reached out to the NYSPRA for comment on the latest gun control registration, but had not heard back as of press time.
The four sponsoring legislators were on hand for the bill signing, as were Scott Beigel’s parents, Michael and Linda Beigel Schulman.
The governor paid homage to them, saying, “When you realize that so many people have been affected by gun violence, they lost someone they treasured, and those particularly who lose a child, it’s more than heartbreaking. It has a permanent mark in your soul to lose a child that you brought in this world. And for so many, they retreat into that pain because what else can they do? They just suffer in silence. But it takes extraordinary individuals to say, ‘I will not be silenced by gunfire. It may have taken down my son and other innocent children that he tried to protect when they should have been in the most secure place, their own school.’ You’ve been an inspiration to so many. And how you harness that pain and transformed it into action is something that is a lesson for all of us on the responsibility we have, not just to deal with what’s happened to ourselves, but also how we can make sure that other families do not have to suffer.”

Regarding the bills’ intent, the governor observed, “We want to continue solidifying New York State’s reputation as having the toughest gun laws in America, because gun violence has not abated. We cannot say we have laws in place and we’re going to rest on that. We have to keep challenging ourselves to address the problems as they keep arising. And as technology changes and as the criminals become more clever and trying to evade our laws.”

Giffords, the gun violence prevention organization founded by former Congresswoman Gabrielle Giffords, applauded the bills, noting that ghost guns are untraceable by law enforcement and can be obtained without a background check.
“Ghost guns present a clear and present danger to national security and public safety,” said Giffords Senior Policy Advisor David Chipman, “These untraceable, DIY firearms are increasingly being used to commit violent crimes and law enforcement is left with little to no information for an investigation. Hochul and leaders in New York showed they weren’t afraid of the gun lobby and demonstrated the leadership necessary to reduce gun violence in New York. Other states should follow their lead.”

“Amidst an epidemic of gun violence plaguing the United States, I commend my good friend Governor Kathy Hochul for supporting and signing this bill which I sponsored in the Assembly,” said Lavine. “This new law further strengthens New York’s existing gun safety laws, already among the toughest in the country. It also significantly increases protection to our community and our children by creating much more accountability.”

Rosenthal noted, “Even those who would not be able to access a firearm via legal means can evade the laws to get their hands on all the parts necessary to make a gun on their own. Jose Webster, was a 16-year-old living in the Bronx with his mother when he was shot 15 times while he walked his girlfriend home. It was not even 9 p.m. and the walk was only seven blocks.”

The press release went on to state that in 2020, “there were 19,379 gun violence deaths in the US, the highest number recorded in more than two decades, and more than 611 mass shootings. Children are at an increasing risk of being injured or killed because of gun violence. According to a 2019 study, gun injuries are the second-leading cause of death among children and teens and the leading cause of death among high school students.”
The pandemic created an unprecedented demand for firearms, and a Harvard Law Review article revealed that more than 80 percent of all ghost gun kit manufacturers experienced shipping delays because of the extreme demand. The Rockefeller Institute of Government reported that between 2017-20, ghost guns seized by law enforcement agencies rose by 479 percent.

The new law defines a “ghost gun” as “any firearm, rifle, or shotgun that isn’t serialized and registered in accordance with either state or federal law.” 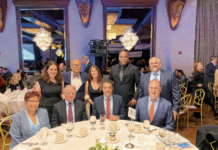